Warning: Invalid argument supplied for foreach() in /home/customer/www/lyricslinger.co.uk/public_html/wp-includes/class-wp-theme-json.php on line 1091
 Should songs that offend be banned? - LyricSlinger
Skip to content

The Rolling Stones have been in the news this week as it’s been revealed that they have dropped their famous hit ‘Brown Sugar’ from the set list for their 2021 US tour. The suggestion is that Brown Sugar has been dropped because of its contentious lyrics that deal with slavery.

It could be seen as ironic that their tour is called the ‘No Filter’ tour, and it is reminiscent of the fuss that ensued when Radio One decided, in 2020, that it wouldn’t play the original version of ‘Fairytale Of New York’ by The Pogues.

Looking at social media commentary, in the wake of ‘Brown Sugar-Gate’, one phrase I’ve seen crop up is ‘cancel culture’. In this article I’m going to discuss whether we should regard these controversies as being part of a wider cancel culture, and whether it’s right that songs that offend are banned or that artists should simply self-censor by not playing them? 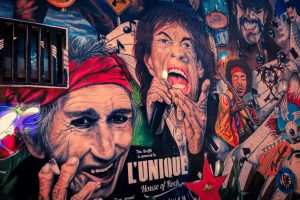 My immediate response on hearing that The Rolling Stones had decided not to play Brown Sugar was one of surprise. I’ve listened to it many times and didn’t think it was worthy of censure. On reading further, I think the media are perhaps guilty of reading more into this story than actually exists. The band hasn’t said they’ll never play it again – they’ve just indicated that it won’t be part of their repertoire for the upcoming shows.

And a reference to Mick Jagger saying that he wouldn’t write the song these days is actually a very old quote from a Rolling Stone interview in 1995. I guess though that headlines saying the band have ‘dropped’ the song generate more clicks than would titles saying that it just hasn’t made it onto their set-list?

That said, the song has become controversial. The BBC’s article on the story comments that the song’s lyrics contain ‘problematic references to slavery, sex, sadomasochism and heroin’.

I re-listened to the song today (as I’m sure many people did!) and my observations are:

Personally, I don’t have a problem with the lyrics as, taken on their own, they are not advocating or glorifying slavery, or the exploitation and rape of women. Guitarist Keith Richards reflected on this when he commented ‘Didn’t they understand this was a song about the horrors of slavery?’ when responding to the notion that some people want it buried.

Where there is possibly more of an issue is that there’s a disconnect between the lyrics and the tone. The lyrics deal with a very deep subject and are calling out the brutal mistreatment of a young slave girl. But the tone is quite joyous – it’s a sing-along type of song, and my original take on it was that it was Jagger extolling his love of black women.

If Marsha Hunt is right that the song was about her, then what Jagger is maybe guilty of here is creating a song that isn’t quite a protest song and that also isn’t just a song about love or lust. It feels like its edges are blurred, which sometimes makes for good art.

I’m not sure that’s enough of a reason for it not to be played, but if he was re-writing the song now, it’s interesting to ponder whether that dissonance between lyrics and upbeat tone is something he might change?

Other controversial songs – One In A Million, and Fairytale Of New York Hearing the debate that Brown Sugar has generated, made me immediately think of two other songs, and I think they are quite different in nature.

One In A Million was a Guns N’Roses song that appeared on their early GNR Lies EP. Unlike Brown Sugar, I recall it being immediately controversial. The reason was lyrics that included racist and homophobic content. The band (and songwriter Axl Rose) have effectively disowned the song. For example, it wasn’t included recently when they issued a re-released ‘Locked N’Loaded’ version of their 1987 album Appetite For Destruction that also contained many other songs that were recorded in that 1980s era.

Re-listening to the song it’s VERY obvious that it contains lines that are simply unacceptable today and, frankly, were unacceptable back in the 80s too. It’s not just that Rose referenced words that are commonly considered to be derogatory, but the context in which they were used. He is having a rant in the song about certain groups of people, including black people, gay people, and immigrants.

I’m actually a big fan of Axl Rose and I don’t think we should judge him just on one song that he wrote, with the intent to shock, when he was young. I would be disappointed though if the band was still advocating it, or if it was played on the radio.

The other song that I’ve already referenced is Fairytale of New York, which was a big hit, in 1987, for The Pogues and Kirsty MacColl. It hit the headlines more recently when UK radio station Radio One said that it wasn’t going to play the original version, due mainly to one particular word within the lyrics. That word is a derogatory term for someone who is gay, and I think most people would agree that it’s a term that shouldn’t be tolerated when directed in anger or a derisive way at a gay person.

In the song however, that’s not the context that it’s used in. Rather, it appears as part of a heated argument between a heterosexual couple. Songwriter Shane McGowan has explained that ‘The word was used by the character because it fitted with the way she would speak and with her character. She is not supposed to be a nice person, or even a wholesome person. She is a woman of a certain generation at a certain time in history and she is down on her luck and desperate’.

I think that context is really important. Songwriters (and writers more generally) should be able to step into the shoes of characters and have those characters speak views and words that the songwriter himself or herself wouldn’t agree with.

That, and the fact that the word is not being directed towards someone who is gay, makes me feel that censorship of the song is unwarranted, and unnecessary.

How do we decide what should or shouldn’t be banned or dropped?

The phrase ‘cancel culture’ has gained currency in debates about where the right balance is between freedom of expression vs the desire to curtail hate speech.

It’s a phrase that I dislike. I think it’s a lazy term and one that has been hijacked for political purposes by those on the far right of the political spectrum. Their protestations frequently have a whiff of ‘I’m not a racist but …’ about them.

I don’t personally think it’s right or helpful to talk about there being a widespread culture of people just wanting to cancel artistic output. But we do need to be careful about where the line is drawn around censorship. Throughout history, those who have burned books and championed censorship have not come to be regarded as morally enlightened.

My particular concern is that if writers aren’t able to create characters whose views are objectionable (and who say ‘bad’ words) then where will that lead? To take an example from the music world, Alice Cooper has made a career from a stage persona who is portrayed as a villain. Are we saying that kind of creativity would need to be curtailed in the future? Or moderated to such an extent that the villain hardly appears to be evil at all?

What about objectionable villains within films, plays or novels?

For me, it’s important to look at the context of each song or film or whatever creative media is being discussed. We should consider:

It should only be in very obvious and extreme cases (like One In A Million) where any form of censorship should be tolerated. Freedom of expression is important and what people find offensive can also be very subjective.

That said, if a band decides that they want to retire a song for fear of offending, then that is absolutely fine. It is their prerogative as the owner of the song to decide whether they play it every night or never. I suspect that Brown Sugar will be played again, and maybe a positive that will come from this debate is a better understanding of the songs context and of The Rolling Stones’ support for equality.