I recently attended a gig at Bannermans music venue in Edinburgh that was headlined by the Electric Boys, supported by Last Great Dreamers. Here’s my write up of it. I guess it’s part gig review but also just some thoughts on the experience of going to see live bands.

My return to gigs after a long break

I recently made a return to going to live music gigs when I went to see Enuff Z’nuff at Bannermans in Edinburgh. It had been a long time since I had seen any band play live. This is mainly down to becoming a dad and also moving out of Edinburgh to a more rural location. Being a parent can be an all-consuming affair and many parents end up struggling to get to the cinema, or theatre, or basically anything that doesn’t involve having kids in tow!

However, my wife got the rare opportunity to go to a concert (to see P!nk) with a friend, and then a post came up on Twitter from @EnuffZnuff saying that they were going to be playing a gig at a venue in Edinburgh. I’d enjoyed listening to their self-titled debut album away back when I was at university in the early 90s, and decided I would go and see them. It turned out to be a great decision and I even ended up writing a blog post about it.

Choosing to see the Electric Boys

Having been to the Enuff Z’nuff gig I found myself looking at a listing of the gigs that were coming up at Bannermans. There were two that really caught my eye. The first was Jizzy Pearl’s Love/Hate, and the second was Sweden’s the Electric Boys. I’d also loved both those bands when I was younger. Love/Hate’s Wasted in America album is a great one to check out for anyone who likes bands such as Guns N’Roses. The Electric Boys debut album Funk-o-Metal Carpet Ride was an outstanding rock album with funk and psychedelic flavours.

Both gigs were quite close together and I couldn’t justify going to both of them. Choosing was a tough decision but what helped was that I saw that the Electric Boys were being supported by Last Great Dreamers. They’d also supported Enuff Znuff and I’d been very impressed, so it looked like a sure-fire winner to have two bands that I knew I would like!

Being better prepared this time 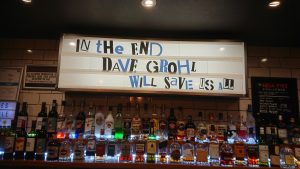 I’d turned up at the Enuff Z’nuff gig, straight after a work conference, with enough money to buy a couple of drinks but not much more. I regretted this when I saw the merchandise stand and I just had enough money to buy Enuff Z’nuff’s Dissonance album. I also was a bit unsure about how long it would take me to get from the venue to the train station, so made my exit slightly before the end of the gig to make sure I didn’t get trapped in Edinburgh!

This time I made sure that I was in Edinburgh early enough to do a practice walk from the venue to the train station so I was comfortable about just how short a walk it was. Whilst I did that I spotted a bar with a cool sign. On yet another day when the Brexit crisis was in the news I wondered whether the proclamation that ‘In the end Dave Grohl will save us’ was  put up with that in mind? If so, hurry up Dave!

I also brought enough cash to be able to buy some goodies from the merchandising stall. I bought ‘13th Floor Renegades’ by Last Great Dreamers and signed up to their mailing list. And I bought ‘The Ghost Ward Diaries’, the new album by the Electric Boys. I’ve subsequently been enjoying listening to both of them! ( I should probably do a review of those albums if I can find the time!) 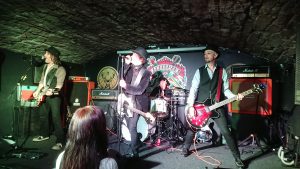 Last Great Dreamers are a UK-based band. From what I’ve been able to piece together, they appear to have first emerged I the 1990s but then broke up, only to reform more recently. When I saw them at the Enuff Z’nuff gig I was impressed by the energy and theatre that they brought to their performance and also by the quality of the music. There was a raw energy and lots of big singable choruses. Singer Mark Valentine and guitarist Slyder were joined by a newly recruited bass player and drummer.

I remember thinking how impressive it was that the new guys were able to play all the songs without (at least as far as I could tell) making any mistakes. And I went away thinking what a great band Last Great Dreamers are and how come I’d only just heard of them. This time round they were the only support act and they got a good amount of time to run through a selection of their best songs.

After the gig I saw the guys standing in the bar and went up to congratulate them on a great performance. I mentioned that I’d loved their previous show but thought this one was even better. I was in a rush to get to the train station so I didn’t elaborate on that. However, I think one of the reasons is that it looked like the bass player and drummer were now (naturally) more comfortable with being part of the band. Their body language and how they interacted with the rest of the band was noticeably more vibrant. There was some nifty footwork from the bass player and he and Mark seemed to be interacting to such an extent that I worried that Slyder might feel left out! 🙂

The songs again were great and were packed in one after another, building the energy and intensity. I jotted down a few notes on my phone as I watched and one of them was about how drummers must be the hardest working people in rock. Being drummer at a gig must burn more calories than any gym class!

I recognised some of the songs this time round. There was ‘White Light Black Heart’ which has a huge singalong chorus. It was followed by ‘Whose side are you on?’, another really catchy song. It was mentioned that they had tried to sell it to a big name band, and they then joked that it was One Direction! Whoever it was made a mistake as it’s a great song. (It should be called ‘A hundred times’ or ‘I messaged you a hundred times’ though!)

Other songs that stood out and brought the show to a close were ‘Far From Home’, ‘Dope School’ and ‘Oblivion Kids’. If you get the chance to catch Last Great Dreamers then make sure you do.

The Electric Boys – From late 80s to the present

Back in about 1989 I read a glowing review of an album called ‘Funk-o-Metal Carpet Ride’ in a rock magazine. The album was by a new Swedish rock band called the Electric Boys and I decided to give it a try. That was one of the best album purchases I ever made and I have listened to that fantastic album many times, first on cassette and then on CD.

A year later I set off for university and ended up going to some rock discos, where Electric Boys songs featured regularly, especially the infectiously groovy single, ‘All Hips N’Lips’. I was sure that Conny Bloom and his bandmates were set for huge stardom. But it didn’t really work out that way. Their second and third albums, although they contained good moments, didn’t really build of the psychedelic funky vibe of their debut offering. Additionally, ‘Smells like teen spirit’ crashed into the charts and the Grunge wave that it unleashed washed away the hopes of many great classic/hard rock bands.

It’s great to see then that the Electric Boys have not let themselves be consigned to history. When I saw that they were going to be playing Bannermans dark and intimate venue in Edinburgh I was really excited. But I was also slightly nervous; worried that they might be a pale imitation of their youthful grandeur. Well, I’m here to tell you that nothing could be further from the truth – they were magnificent. They are magnificent!

Electric performance by the Electric Boys

Arriving on stage, lead singer Conny Bloom asked the crowd if it was okay if the band played a few of their new songs. The response was an enthusiastic ‘Yes!’. There followed a great mix of new and older songs.

Amongst the newer ones, some that stood out were ‘Hangover in Hannover’, ‘You Spark my Heart’, and ‘First the Money, Then the Honey’. All great hard rock songs enthused with a strong groove. But maybe the standout new track was ‘Gone, Gone, Gone’, a song that they said was about the death of a good friend. I think the emotion behind that song makes it special and their friend would be very proud of it.

There was some lively interaction with the crowd, and at one point Conny asked for views on what song they should play next. A guy near the front shouted out ‘Angel’ and the band quickly launched into a song called ‘Angel in an Armoured Suit’. Not one of their songs that I had heard of but it was fabulous. There was also some off-the-cuff improvisations and they seemed like a band at ease with themselves and having fun.

I enjoy it when bands have a bit of banter with the crowd and one such moment was when a pint of lager was passed up onto stage for the band’s drummer. Conny took a sip of it first and then commented that the drummer would be a different person now that he had a beer.

A brilliant end to a great night

Of course the old songs were great too, and included Electrified, Rags to Riches, Psychedelic Eyes, and All Lips N’Hips which was played as one of the encore songs. Bass player Andy Christell joked that there was no option but to play more songs given that Bannermans doesn’t have a backstage exit. To get out, bands need to leave by the same exit as the fans!

It was really cool at the end that the guys stuck around to sign albums and Andy, Franco Santunione (rhythm guitarist), and Niklas Sigevall (drummer) signed my copy of the The Ghost Ward Diaries album.

As I left, the Last Great Dreamers were standing in the bar re-hydrating themselves and I plucked up the courage to go across and congratulate them on the gig. I mentioned that I’d enjoyed their show when they’d supported Enuff Z’nuff but that this time had been even better. I hope that I get the opportunity to see them again some time and that the Electric Boys grace us with their talent again soon as well!

So that’s the end of this post. I hope you’ve enjoyed reading my review. If you get the chance to see the Electric Boys or The Last Great Dreamers make sure you grab it! (Oh, and go and buy their albums. Now)

Previous Post: Combining scriptwriting and music in a Sci Fi odyssey
Next Post: A Grunge Cut Up Technique case study – Something Awful Happens