I’ve recently got involved in combining scriptwriting and music for what I can only describe as an epic sci fi musical screenplay. ‘The Journey’ is a story that was thought up by Mykk Freeman and currently covers 20 ambient musical tracks. It tells the story of a group of humans who flee an ailing Planet Earth in search of a new start amongst the stars.

My role has been to provide the script to move the story along and bring the cast of characters to life. We’re about halfway through and it’s been great fun to work on. And it’s also been a bit of a throwback to what I used to do …

My previous life as a comedy sketch scriptwriter

From 1999 through to about 2007 my main writing passion was writing scripts for comedy sketches. During that time I had sketches performed at the Traverse Theatre and the Stand Comedy Club (both in Edinburgh) and also staged two comedy shows in Glasgow in conjunction with writer friend, the very talented Mister John Mooney.

That was great but a couple of things conspired to move me away from that form of writing. First of all, the opportunities to have comedy sketches performed had seemed to have dried up. The brilliant Monday Lizard event that the Traverse Theatre arranged for new writers closed and, without it, there wasn’t any avenue of the same quality to get one’s scripts performed in front of a live audience.

And, in parallel, I got into a relationship and ended up married and with kids. Writing sketches requires the ability to sit down for a prolonged period to focus on the story you’re creating. That’s time you just don’t have when babies and small children are on the scene!

I’d always written lyrics (or at least snippets of lyrics) and, with time being such a reduced commodity, I found that lyric writing was suddenly a better creative outlet for me. I could write a few lines, maybe a whole verse or a chorus, while waiting for a train to arrive. Or while I was making the dinner. And then return to it the next time I had a few spare minutes. And I discovered a couple of great websites through which I could then collaborate with musicians, MuseSongWriters.com and Kompoz.com. What an amazing discovery that was and I have enjoyed being part of those communities ever since. 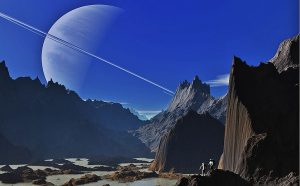 Kompoz is an amazing site that I think demonstrates the very best that the Internet has to offer. Lyric writers and musicians from all over the world can come together to collaborate on songs. I can post a lyric and it might be picked up by a guitarist from Germany, a singer from the United States, and a drummer from Brazil. And, most of the time, everyone works together in a really harmonious fashion, and the end results can often be breathtaking.

Anyway, that’s enough eulogizing about the merits of Kompoz. Check the site out for yourself if you’re interested! What I want to talk about in the rest of this article is what’s been happening with the musical screenplay that goes by the working title of ‘The Journey’.

We have blast off! 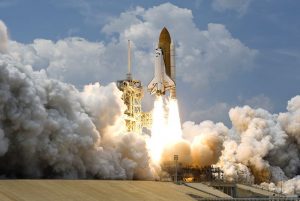 I mentioned that Mykk Freeman came up with the idea for The Journey. He had initially created something like 14 musical tracks and had then written up details of the high level story progression for each track. And also notes on the main characters and why they had set out from Planet Earth on a daring mission into outer space.

I think it takes a bit of a mad genius to even propose such an ambitious project, especially when Kompoz is primarily about creating songs, not pieces of music that are largely spoken word orientated. As well as my background in scriptwriting, I also am a fan of sci fi stories and films and have written a few lyrics that are science fiction-related. (And also a sci fi comedy sketch!). I was a bit daunted by the scale of the project but decided to jump in by making script suggestions for an initial part of the story. Luckily, Mykk liked it and he asked if I’d like to do all of the script. We were off and running … or perhaps flying! 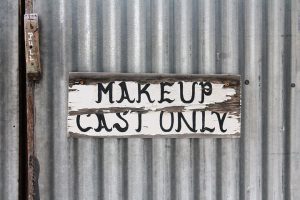 We needed to recruit a stellar cast of actors, singers and musicians to pilot The Journey and, thankfully, some willing recruits stepped forward!

We have Thomas Hines as our intrepid Captain. It’s a tough job but he’s fully committed to guiding his people across the universe in search of a new life.

Shelia Burket is Victoria Hines, the Captain’s wife. She’s a supportive soul mate but will show a tough side if her man or her friends are threatened.

My wife, Montaffera, plays the Fighter Captain Alice Hudson, a very feisty force on the ship. It’s fair to say that she doesn’t agree with many of Captain Hines’ decisions.

Mykk plays Mic McCarthy, a spy who is not adverse to dabbling in political machinations.

Donnie Alan is Father Luke O’Brien and Mark Nine is the ship’s scientist. Despite having different views on spiritual matters they are friends who enjoy sparking off each other.

Jen Carie plays the ship’s psychologist. Her role is to be aware to the mood of those on the ship and her positive outlook and loyalty make her a good ally of the Captain.

James Fraser plays the ship’s engineer, Chris Brennan. He’s another trusted member of Captain Hines’ crew, and his engineering expertise will be crucial if the mission is to have any prospect of success.

And I play the ship’s Navigator, Pat Worsley. It’s Worsley’s role to map a path through the far reaches of space to locate somewhere new that can become home. (Incidentally, naming him Worsley is a bit of a nod to the great New Zealand navigator and explorer, Frank Worsley. If you’ve never heard of him or his role in the Imperial Trans-Atlantic Expedition then read up on that amazing story of human perseverance and survival.

There are other roles (and some of our actors perform more than one of them) but that’s a quick introduction to some of the main protagonists! 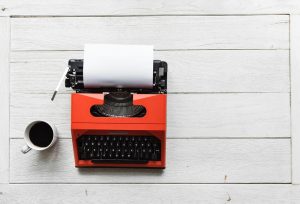 Planet Earth is in trouble. Climate change is out of control and humanity has completely messed up its response to it. Whilst Earth’s politicians continue to squabble, a small intrepid group steal an army spaceship (!) and launch themselves into space. Their goal is to find a new home for humans amongst the stars and start afresh.

However, you can’t expect to steal a spaceship and shoot off into space without facing a few challenges, and Captain Hines is about to face more than his fair share. Will there be technical problems? How will they find another planet that can support life? How will the morale of the crew hold up as they face months and possibly years in each other’s pockets?! You’ll have to listen to the tracks in due course to find out!

The process of writing the scripts 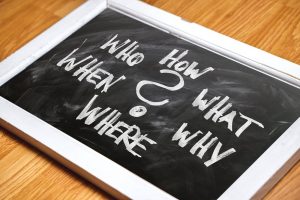 Mykk has done a great job of creating all the supporting ambient music tracks, and provided a brief steer per track. For example, ‘Working the bugs out. where to go, what to do. Amazed by the beauty of space… etc’.

That was really useful as it gave me something to focus my mind around. I started by listening to the music and tried to work out the mood and also where the spoken words might fit in. Then, I just launched myself into writing some dialogue. I wasn’t looking more than about one script ahead, and really just wanted to concentrate on having some sparky conversations and ensuring that there was enough tension to hopefully keep things interesting.

Although I’d initially included time stamps against each section of dialogue, Mykk then suggested that I just upload the script and let him work out where to fit it into the music, something that made my job a lot easier!

When writing the scripts, I aimed to complete an entire track in one sitting. Otherwise, there’s a danger that you lose your train of thought and any consistent pace for the dialogue. I pretty much write the whole section without editing (where possible), and then go back afterwards and read over it and refine it.

It’s been really enjoyable to work on some scriptwriting again, and it’s great the way one idea often leads to another. There are times when the characters take over and when you suddenly find you’ve introduced some twist that you hadn’t intentionally set out to write. As a writer, when you get your characters taking over it’s usually a good sign. 🙂

I think that’s enough for this initial post. I hope to bring you some further updates as The Journey progresses. What twists and turns will the crew face and will it have a happy ending? Even I can’t answer that at the moment but I’m intrigued to see how it all pans out!